Since I got back from my holiday everything has speeded up. I’ve now moved offices to the offsite storage location, and am working there 4 days a week. On Fridays I’m back at the art gallery or hot-desking in the new council building West Offices, to catch up with my line manager and plan the week ahead.

Big news of the day is the first delivery of civic archive material from the art gallery to me takes place on MONDAY, courtesy of an 18-tonne lorry.  Wow. After the archive team has spent weeks of packing and prepping and barcoding, records are starting to move, ready for evacuation of the building.

Actually I have two lots of big news. I’ve also started the final cataloguing into CALM (our software)! As I haven’t got any records to hand yet, my first job is retro-cataloguing the Giles catalogue into CALM, which is going quickly and well. Series and items are slotting into the structure perfectly, and all the authority files that I created are ready to be linked with just a couple of clicks. So satisfying that months of preparation and planning are paying off.

Opening screen of CALM – it can be used for tracking all sorts of info, from locations to conservation work. It’s used by museums as well as archives.

CALM is essentially lots of linked databases, and its interface is dry and not very sexy. Even though it’s new for us, CALM has been around quite a long time, which shows a little in the design and quirkiness of some of its operations. Don’t judge a book by its cover though as underneath it’s great and does pretty much everything we need it to. A brand new completely overhauled version is in development at the moment, and I went along to one of the user groups a few months ago to contribute our views about what we like and don’t at the moment.

This is what CALM looks like on the back end. The public side is different, so this isn’t what the catalogue will look like in use. 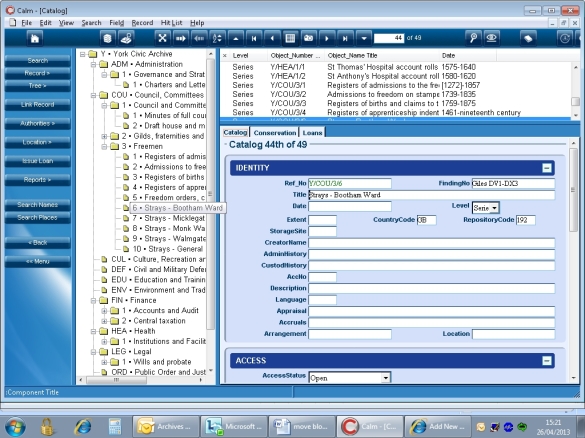 Screenshot of CALM – Ignore the FindingNo field – that hasn’t been tweaked to its final form yet.

On the left you have the tree view, which shows the hierarchical structure of the catalogue, just like windows explorer. You can see the tree is constructed from my functional map of the council over time. Every level has a catalogue record, but only the bottom level represents an actual record or record series.

This how hierarchical description following the international cataloguing standard ISAD(g) works. There is a specified list of minimum information you should provide at each level plus many optional fields, which you can see a few of on the right, waiting to be filled in. There’s a bit of judgement involved in working out how much detail to go into and what information is most important for users, especially when trying to adopt a More Product Less Process mindset.

The structure is sparsely populated at the moment, but will grow to many thousands of civic records, all held within my 13 subfonds. One of the best things about it is that you can alter and change it at any time. This is why I’ve decided to not make the “Reference Number” the permanent ID number for citation and so forth. I know I bang on about it all the time but think it’s important to accept that no catalogue is perfect and static, but will need to be adapted, and so build that potential in from the beginning for sustainability.

Unlike Giles who published a linear list, my main contribution is the structure and records I populate into it – which will organically grow and change over time. Starting with a mostly blank CALM install is both scary and exciting, when my role finishes I’ll be able turn round and see exactly what I’ve done, but from that point it takes on a life of its own and hopefully keep getting bigger and better.

Once more, silence here accompanies busyness in the real world. Over the last few weeks the towers of packing crates have grown, and it feels like our office has too as most of the furniture has been taken away.  I now have a move date for my office to the new location (17th April!) and the final plans for moving both the civic archive and rest of the collections into storage are being arranged with the contractors.

We are still looking for more pairs of hands to join us with the project in June, so please get in touch if you are interested.

With most things planned and prepped for my project, it’s  good point to take a break from the chaos whilst work on the rest of archive carries on, so I’m off for a week’s holiday to warmer climes. If you’d like to get in touch with the archives whilst I am away, you can use our generic email address archives@york.gov.uk or leave a comment here as usual and I’ll get back to you the week after next. See you soon!