It’s now that time in the project where we are looking for people to help us. Whilst I can just about catalogue the archive in the time available, I won’t be able to package everything to modern preservation standards on my own. This is where you come in!

The idea is that I catalogue at series level, then you weed for duplicates and package at the item level. Then when our new strongroom at York Explore is finished next year, we can move it all back catalogued and stabilised.

As well as hopefully being an interesting and fun experience for those taking part (getting your hands on all these wonderful records I’ve been banging on about for months, and making a real contribution to their preservation) the volunteer team is one reason why this project can be so ambitious in its scale. Traditionally an archivist on a funded cataloguing project would do every task from weeding, cataloguing, packaging and labelling on their own. Now, whilst we might enjoy this (I certainly do) it’s not really the most efficient use of time. A more MPLP approach is to split tasks up more efficiently into those that should be done by an archivist, and those that can be shared with others.

So, we are looking for up to 8 people who can do 3 or 6 hours per week on a set week day and time, to be arranged. It won’t be at York Explore, but instead at our external storage site, near the Askham Bar Park and Ride. We are provisionally looking at an early June start date and just carrying on until it is done!

If you would like to find out more, please follow this link to the Volunteering section of our website. There you can find more details of the project in the “Downloads” section on the right hand side, and how you can apply. We expect this to be quite popular, so please do get in touch soon if you are interested!

It’s time for another Lucky Dip! Aisle 7 contains various types of court records, which have been catalogued under the “F” class. Court records are not part of my cataloguing project, but have a place in the new structure that they will be put into later. I selected this box off the shelf… “Debtor’s Prisoners Account books.” 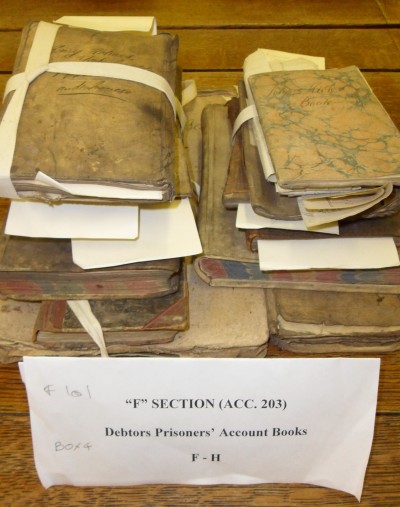 At first glance I assumed it would be accounts for the running of the debtors prison, but as the label says, it is the accounts of the prisoners themselves. When debtors were taken to court for defaulting (in York this was either at the Guildhall or the Castle) their business accounts were inspected as part of the process. As you can see, they were not always returned!

We have several boxes of these accounts, which are a window into the everyday dealings of business folk in York. This box is from the 1830s. They were not created as civic records, but entered the custody of the council as evidence in the legal process.

Out of the pile of books, I picked the top left one to look at in more detail to see what these records have to offer us. 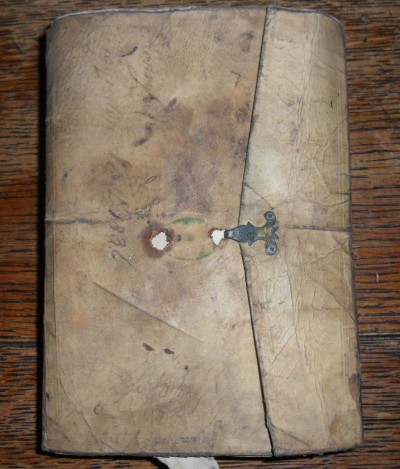 The notebook is around modern A5 size

This is the cash book of Henry Holmes, Miller, 1836-1838. Physically it is very different from the official corporate records we have had for most Lucky Dips.  You can see that is a small notebook of paper pages, card boards, a parchment wrapper and a nice little clasp, that has the options of three different holes to use as the notebook expands in use.

The plate with the holes on has rusted off, but was still slipped in the cover, so I put it back to show what it would have been like

It has been annotated on the back by the court, like all these notebooks, with the name of the debtor (some of the others also have the date of their court appearance). I don’t know how I’d feel about the court scrawling all over my nice notebook, they even wrote upside down!

This writing was added by the court – we learn that Henry Holmes’ case was at the Castle, not the Guildhall

Inside, the book lists all the orders of the miller – who and what he is selling to individual customers. From this page you can see the  types of grains that he milled and sold by the imperial bushel: wheat, barley, oats .This is a great primary source for his trade in this period. 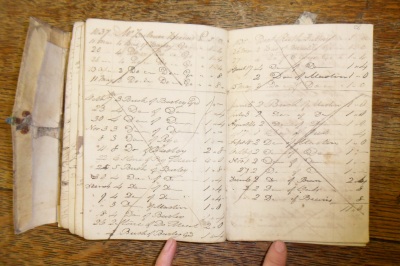 A double page spread of orders, grouped by customer

However, what’s even better is that as well as his customers, he also kept in this book the bills that he paid to others (or not, if he ended up in court for debt!) These have been kept in a little pocket in the book. I tipped these out and looked through to see what I could find. 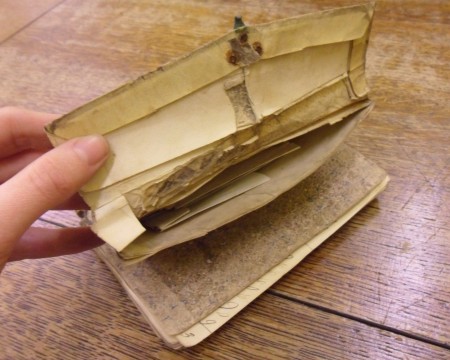 Who can resist filling a pocket in a notebook with receipts!

There is a whole mixture of transactions recorded here, from hay and coal deliveries to the purchase of a coat, and repairs to the leather belts that drove his mill. The bills and receipts vary from pre-printed forms to barely legible jottings from other tradesmen.

Here are the tiny folded receipts – the open one is for a new coat.

This bill, for lengthening a leather mill strap by three feet, has been “settled” – paid – and so wasn’t the reason why he was up in court.

Just by using this one book as a historical source, you could piece together a picture of how this miller ran his business and interacted with the city around him. Using all these books in this series together allows a more complex picture to be built up of local trading networks.

Part of this work has already been done at the archives. This particular collection, part of accession 203, has been listed at item level by volunteers, and a database of customers with over 4000 entries has been created. Some have also been cross referenced with entries in the York Herald. This is exactly the kind of highly detailed information that we have about some parts of our collection, that has been gained over time by close study, but is currently hidden away. 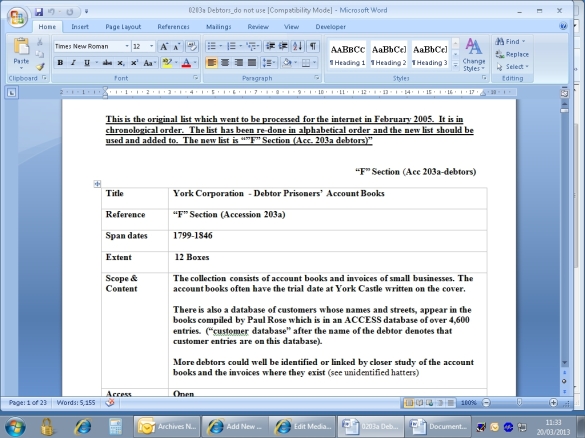 So, at the moment we have a detailed list and database, but a user walking into our searchroom has no easy way of knowing that these account books exist at all unless they ask someone who happens to know! That is why this project is necessary, because it will place individual records in a bigger picture, or map, of the collection, and make them easier to find.

Once a user knows individual series exist, then they can make use of the hundreds of detailed lists that we already have, and get the benefit of research by staff and volunteers over the decades. It’s the perfect example of why archival cataloguing needs to start at the general before moving to the specific, why we need to share the gist of the whole before focusing on the parts.

Joy and Edward getting stuck in with the inventory

Time has flown since my last blog post! I’ve now been to the local storage contractor I told you about, to see the space for the first time and see how much of the collection we can fit in, based on the measurements taken the week before.

It was a really useful visit as it let us see all the facilities including office space, access for delivery vehicles, security, internet, processing space, shelving etc. It looks like a really workable space, phew! We’ve worked out how much we can fit in there, and are negotiating for the extra shelving we need.

As expected, we won’t be able to fit in all the civic archive at once, so the rest will be stored elsewhere with the non-civic archive collections until a large chunk has been catalogued, then we can have a swap over.  This obviously requires a high level of physical control of individual boxes so we can safely transport and accurately identify them. We do this with an inventory. This control is required for the whole archive, not just the civic records.

Chloe and Phil focusing hard on day 3 of the inventory

So, three temporary staff have joined us for a few weeks working full time with Joy and Victoria to make a precise inventory and package items that need stabilising for the move. This means boxing for some and wrapping in Tyvek for others. When the movers are appointed, we’ll then get the barcode stickers and can link this up to our new inventory so we know exactly where everything is at any one time.

While they’re doing that, I’m working out the staged move – splitting the archive into discrete chunks of the right size (such as the Giles-listed material or the NYCRO-catalogued Town Clerks boxes) and deciding which order everything should be catalogued in. I don’t want to make a mistake and find the series of records I need to catalogue first has accidentally been send a hundred miles away!

Aisle 1 as you’ve never seen it before – no loose papers!

The next step will be for Victoria to recruit the volunteers who will physically process the records as I catalogue them. I’ll let you know as soon as the advert is ready in case any of you would like to apply. The final details are still being sorted out but it’s looking like we’ll need 8 people, able to give a regular commitment of one afternoon per week (on specific days), starting around June time. This isn’t finalised yet so please bear with me, you’ll know as soon as I do.

Stay tuned next week for my next Lucky Dip post, if I can nip into aisle 7 to grab something without getting in everyone’s way!